Maybe as apt an introduction to Kathmandhu as any other is the city as a tapestry of sound.  Noise.  Arriving just as the final scraps of sunset run for cover behind the mountains and experiencing a power cut almost as soon as I touch down (during the queue for my visa) it is mostly sounds and darkness that wil impart first impressions to me.

Lying in bed.  Room to myself.  Tired.  Falling asleep but never qute entirely.  My first night in Nepal is a passably goodnights sleep but not too deep owing to the legendarily cacophonous  nature of the Thamel district of town.  Sleep perforated hour by hour by the minor street symphonies of 24 hour urban activity.

First the loud wrench and metal-grinding clatter an screech of shop shutters drawn down.  The putter, popping exhausts and “toots” of mopeds and motorikes snaking their way around pedestrians as they pass through the streets.  Hungrey street dogs yappin, barking and growling with often a purposeless, incessant persistence.  Cars, taxis and cycle rikshaws honk horns in the distance.  the action scenes and dance numbers of the hindi movie being watched in room 303 across the way occasionally erupt, adding to the general chatter and bustle of the Hotel Florid as its many inhabitants continue to defer turning in for the night.  More chatter and shouts in the streets below.  Up  here whole communities of pigeons pool together on window perches, rusted balconies and antennae cooing gregariously about their days activities.

They seem to be right by my head.  By morning the circling, intimidating “caaaaws” of larger carrion-sounding birds can be heard sending the pigeons into a flap.  A man keeps ringing a small handbell for extended periods of time.  A call to some form of prayer or trying to get the manager’s attention?  It’s 6.30 now and the cars and motorbikes too have started to rise.

Today, a gentle stroll around some starter points ofKathmandu.  East from Thamel district down Dhoki street towards the Swayambhunath buddhist Stupa; the largest and most revered of its kind in the Kathmandu Valley and wider Nepal.

This holy site in common tourist and guide parlance has long been known as ‘The Monkey Temple’ owing – unsurprisingly – to the large community of monkies that have made their homes on the steps, paths and in the trees around abouts to the delight of smal children and tourists with decent camera zooms.  Me and my new P.O.S.2000 travelcam struggle a little but get a few snaps out’ve it.

The stupa is a splendid introduction culturally and aesthetically to Nepal.  The brash golds of the main cube and wooden formations of its main stupa ‘tower’ construction; the luridly beautiful eyes of the all seeing Adi-Buddha painted on all four side of the stupa and the large white adobe-looking dome upon which it all rests with the ochre-coloured arcs of colour washed onto its surface by monks to denote the petals of the great lotus leaf of Nepalese Buddhist mythology.

Its a fabulously surreal and beautiful construction surrounded both itself and the various grounds and miniature companion shrines all about by the ubiquitous spinning prayer wheels.  I love those things!  My kind of religion maybe.  Faith with toys and spinny thingies.“cool!”   I’m invited to spin a handheld payer wheel 1,000 times for good incantations but I only have 30 days in Nepal and feel I don’t wanna lose a good 7 achieving this 🙂

The surrounding grounds of Swayambhu contain smaller stupas and littered everywhere many and varied votive shrines to the near infinite pantheon of Gods in Nepalise and Buddhist mythology all of them spattered colourfuly with orange marigold petals, red ‘abhir’ paste and rice grains.  Tall trees are nearly unrecognisable for the sprwling knots and spiderweb of coloured strings of prayer flags that run across the skies in all directions.

People toss coins at a Buddha in the middle of a pool.  Small boys carry large flag-poles of neon pink candyfloss.  Others watch over small wire haf-cages set on the ground containing clusters of sparrows or captured green parakeets.  For food or pets I’m not quite sure.  The monkies run about, occasionally erupting into screams and fights and sad-eyed ladies clutching their babies beg with surprising grace for alms that are rarely forthcoming.

Back down to laaaaaarge amount of steps earlier surmounted to gain the grand eastern entrance of the Stupa I walk back to one of the main town intersections I’d made my way from earlier and this time turn in the direction of Durbar Square.  This large public space contains a great wealth of pagoda-style temples and shrines.

People; families sat on them watching the crowds pass by.  This is the holy site from within which, from one of the temples every few years the ‘Kamari’ ; goddess in human form is chosen in the form usually of a pretty heavily made up and gold bedecked 8 year old girl.  I’m told a whole bunch of times by so called guides trying to get my business that today’s a special festival day and she will be making a public appearance later but this turns out to be a load of bunk.

Although this is a public access transit area of Kathmandu you still have to pay 200 Nepali Rupiya (NPR / approx $3.60) to enter.  Your initial ticket is date stamped for 1 day only but just walk right to the Visitors Site Centre and at no extra charge they will supersede this and issue a ticket for pretty much as long as you want.

Do this for the sake of ease.  Some buses run from here and you may need to pass through even if not on sightseeing duties.  You will also be approached by a lot of people wanting to be guies for you either around Kat (often they’re a pain and don’t give up easy) or they may be trekking guides prepared to go far further afield with you and your pals (potentially useful for trek research).

I spend most of my day walking around these areas.  Heading north east out of Durba is a fabulous fabulous street run leading to Indra Chowk this whole area being where the Nepalese locals have a lot of their bazaar stalls and shops.  It’s so much fun, and such a sensory overoad ambling through this part  of town I can’t recommend it too much.  Brightly coloure saris everywhere, people crounched on curbstones selling all manor of wares, motorbikes and cars trying in vain o o progress past the dual currents of colourful humanity flowing in either direction.

Cats cradles of electricity cables spider overhead.  Tired, leather-faced old women stare down at the anarchy from above as young children sprint between the forest of legs below.  Coloured powders and piles of seeds in sacks.  Fabrics of every colour draped from shrine walls and windows all about.  Small gods crouch in the shadows of cluttered buildings, in the eaves and nooks of old wooden-carved buildings, dark and recessed many of them.  Long merged ino one with the skin of the growing city, only noticed by those who stop to pay obescence and throw marigold petals and rice  in exchange for a daub ‘abhir’ to adorn their foreheads.  It’s marvelous!  3 old saddhus kindly agree to sit for a photo for me… well ok, for a 10 rupiya donation, but why not!

My first day in Nepal has been an unadulterated sensory joy!  I’ve seen loads AND managed to be organised too! I’ve bought a jumper so I don’t freeze to death on a trek and found’n’ booked a good priced ticket to Bankgok for later December already.

Are ya impressed? No?!  Ah well, “sod ya then!” ;D  The only little gre cloud on todays horizon is the recurrence of a rather troubling pain in your intrepid reporter’s infamously wonky left-knee.  Very painful by days end… but FEAR NOT!  Even if I have to strap  m’self to the back of a yak and whip it all the way to the top of the hills with a bruised breakfast banana skin I am gonna conquer them there mountains I swear!  Watch this space. 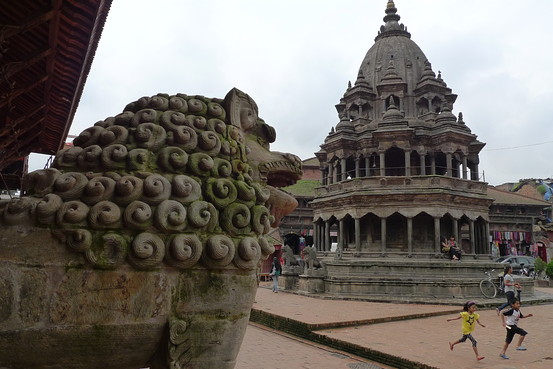