The City and the Writer: In Kathmandu with Manjushree Thapa 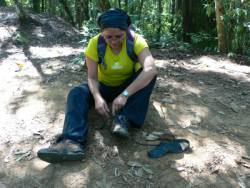 If each city is like a game of chess, the day when I have learned the rules, I shall finally possess my empire, even if I shall never succeed in knowing all the cities it contains.  —Italo Calvino, Invisible Cities

Can you describe the mood of Kathmandu as you feel/see it?

Kathmandu jostles and jangles; it’s always in a hurry; there’s hardly any time to stop and think here. It has an elegant and sophisticated medieval core built carefully, over centuries, by the Newar people, who settled the city as we live in it today. Laid upon this core is a more hurried, slapdash society, a society of migrants from the countryside driven here by need and aspiration and a pressing desire for a better life. This society grows more frenetic by the day. Kathmandu is also a city of power, a capital city that hoards resources, favoring the few and denying the rest. It has a very real ugliness on display. All of its human drama takes place in an ecologically fragile valley in the foothills of the Himalayan range. Every now and then I glimpse the natural beauty of the valley, and stop in wonder—but mostly I’m caught up in the jostling and jangling.

What is your most heartbreaking memory in this city?

When I was growing up, my cousins and I would have picnics in the paddy fields and wade in the streams. There wasn’t much wilderness here—this was always an urban environment—but there was plenty of greenery: we could always rest in the shade of a poplar tree. Now the rivers are dead, the open spaces are given to construction, and even the fiercest west winds can’t rid the air of toxic particulates. I don’t yearn for what’s gone. Kathmandu’s growth since 1990, when we became a democracy, represents the increased prosperity of Nepal’s citizenry. This matters. I do, however, miss the natural world in my daily life, and wish we could live in a more habitable environment.

What is the most extraordinary detail, one that goes unnoticed by most, of the city?

It’s very easy to forget that the wilderness is close at hand. A half-hour ride out of the city center, and I’m hiking through a rhododendron forest on one of the hills that ring the valley. I couldn’t live in Kathmandu without getting out every so often. Every time I go on one of these hikes, I wonder why I don’t do this more often. I vow to come back soon. Then, back in the city, I get caught up.

What writer(s) from here should we read?

I’ve translated the works of 49 Nepali writers in The Country is Yours: Contemporary Nepali Literature—and this gives only the briefest glimpse into Nepal’s contemporary literary scene.

There’s a very active literary scene here. Most of the literature is written in Nepali or one of Nepal’s over-a-hundred other languages.

In the generation that preceded the present one, Parijat is a must-read. She moved from Darjeeling, India, to Kathmandu in the 1960’s, and in her writings captured the hard intellectual edge of modern Nepal. And though he’s from Darjeeling, India, Nepal likes to claim Indra Bahadur Rai as one of its own, as he writes in the Nepali language. He’s certainly one of India’s best writers.

Among younger writers, I’m very partial to the poems of Bimal Nibha. He’s part of the generation that struggled to bring democracy to Nepal in 1990, and then had to watch so many rights erode over the next fifteen years, as the country suffered through bad governance and a Maoist insurgency. In one of Bimal Nibha’s most iconic poems he challenged the Maoists at the height of their war against the state: I’m an ordinary person / who writes the news who writes poems / who drinks tea and rushes off / a worker who delights and weeps / (Nothing exceptional about me) / Am I not also engaged in a People’s War, Comrade?

But this is just one example. Hundreds of writers and poets produce thousands of new books every year here: it’s difficult for even the most ardent literature-lover to keep up.

One of my favorite poets from here also includes the American expatriate Wayne Amtzis, who writes haunting poems of witness, what he calls “a gathering of evidence.” Some of his work is at http://www.photo-poems.com

Is there a place here you return to often?

I find myself always longing for silence here—not just the absence of noise, but the kind of profound silence in which thoughts and emotions clarify. I’ve been able to find this kind of silence in the monasteries of Kathmandu, monasteries in the Tibetan neighborhood of Buddha and on the hills that ring the valley.

Is there an iconic literary place we should know?

There’s a peepal bot, or bodhi tree, growing by the side of the shops in New Road, which is Kathmandu’s bustling commercial district. Till the 1900s, writers and poets and intellectuals would gather around this tree in the evenings, over a cup of tea. The tree was next to the best newsstand in town, where all the international papers and magazines were available. The American library (which closed as part of the budget cuts of the Reagan administration) was nearby. So many Nepali writers learned about American literature—Whitman, and Poe, and the Beat Generation—at that library, and shared their views with each other at the peepal bot.

After 1990, the literary scene grew larger, and also more diffuse and scattered. The peepal bot lost its significance, but it still stands, a memorial of what used to be a site of real intellectual ferment.

Are there hidden cities within this city that have intrigued or seduced you?

Kathmandu is a maze. It’s possible to lose yourself in its circles, which are many, and sometimes interlocked and at other times not. We live side by side with others whose lives are completely closed off to us. As the city grows, new neighborhoods crop up, new societies form—different parts of the city are inhabited by migrants from various parts of the country. The city keeps changing and becoming something other than what I thought it was. Every few years I feel like I have to discover it anew.

Where does passion live here?

There’s a lot of passion here in the public arena—this is most evident in our politics—but ultimately, I think Kathmandu’s passion really lives in the family life. The petit-bourgeois concerns—for slightly sturdier shelter, somewhat tastier food, clothing that’s just a bit more stylish—really predominate. This is very civilizing. It keeps us from allowing political ideology to dominate.

What is the title of one of your stories about Kathmandu and what inspired it exactly?

“Friends” is inspired by my own confusions after I returned to a socially conservative Kathmandu after completing my college education in the US. This was in 1989. I was an America-educated bohemian, a misfit, and I was intensely miserable most of the time.

“Friends” is the story of a friendship between a hippy Nepali-American man and a staid, duty-bound Nepali man who has never left Nepal. They strike up a friendship in Kathmandu’s low-budget tourist district, Thamel, where East and West mingle effortlessly. I spent so much time as a twenty-something in Thamel, where it was possible to meet friends (even boyfriends!) without attracting the censure of Kathmandu society. The story is really my tribute to Thamel.

Inspired by Levi, “Outside Kathmandu does an outside exist?”

Outside Kathmandu is all of Nepal: of that I’m certain. I’m not certain, though, if an outside exists outside Nepal, at least not for me. I tend to bring Nepal along with me everywhere I go.

Manjushree Thapa was born in Kathmandu in 1968, and she grew up in Nepal, Canada, and the United States. She was trained as a photographer at the Rhode Island School of Design, and later studied creative writing as a Fulbright fellow at the University of Washington. She is the author of two novels, The Tutor of History and Seasons of Flight, and a short-story collection, Tilled Earth. Her nonfiction books include Forget Kathmandu, on Nepal’s political upheavals, as well as a biography, A Boy from Siklis: The Life and Times of Chandra Gurung and The Lives We Have Lost, a collection of her essays on Nepal’s Maoist insurgency and peace process. Her stories have appeared in literary magazines in the US, and her essays have appeared in the New York Times, the London Review of Books, and in the print media in South Asia. She also translates Nepali literature into English, some of her translations can be found in The Country is Yours: Contemporary Nepali Literature. She lives in Kathmandu and Toronto.
Orginally Published on  May 28, 2013 (http://wordswithoutborders.org/)